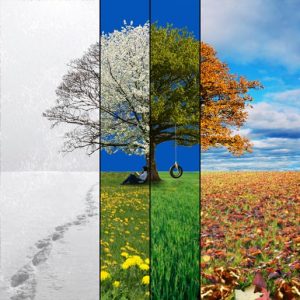 One of the most important lessons I have learnt has been to live intentionally according to the seasons of my life. It has helped me understand God’s unfolding plan for my life and to see how He is at work in various areas of my life at any particular time.

There is a liberty that accompanies the person who lives in harmony with the seasons of life. It frees a person from the need to live according to the expectations of other people or to miss God’s Kairos moments that sometimes unexpectedly break into our lives.

In his recent book, New Thinking New Future, Sam Chand opens up the idea of seasons being constantly disruptive rather than everything always being neat and tidy. “Leaders who insist on a consistent, predictable environment value safety above progress and their goal is to avoid losing…….Our task is to help our people see the benefits in the SEASONS of ambiguity when things aren’t clear, the SEASON of chaos when the end isn’t in sight, and the SEASON of doubt when they wonder if we’ve lost our minds. These are the disruptive seasons of possibility, hope and exponential growth.” (p.98)

One of the most important seasons in a leader’s life is the season of preparation. Unfortunately, many emerging leaders want to cut it short or even avoid this season before God has fully shaped and developed the person for the task He has planned for them. I am thankful for the leaders that graduated from God’s school of preparation even though the season lingered for an extended period of time. I think of Moses whose season of preparation lasted 80 years, or David who had to wait 13 years from the time he was anointed by Samuel to be king to the time he ultimately became king. Seasons of preparation don’t fit well in a world characterised by instant gratification. Joseph’s season of preparation involved him being sold into slavery and wrongfully placed in jail. However he had the amazing insight to be able to say to his brothers after his lengthy, and at times painful season of preparation, “Don’t be afraid. Am I in the place of God? You intended to harm me, but God intended it for good to accomplish what is now being done, the saving of many lives. So then, don’t be afraid. I will provide for you and your children.” Genesis 50:19-21

The season of preparation involves developing leaders in their character and their competence and it takes a sovereign, all knowing God to get the agenda right, even if we don’t sometimes understand what is happening.

I have never taken a class on Seasons of Life 101, but if I had to develop a curriculum, the following would be some of the issues I would want to address:

Finally, a few suggested steps so that you might determine to live intentionally according to the seasons of your life.

So, seize the season. Say yes to the things that will help you successfully embrace the purpose of the season. Follow the promptings of the Holy Spirit as you journey with the Father through each season of life. Keep the big picture in mind of which this season is a part. Don’t camp by the season and make it an end in itself. At the right time move forward into the next season that will be waiting for you. And remember……….“There is a time for everything, and a season for every activity under the heavens.”

THE POWER OF YEAST Did Jesus really mean what He said?

SEASONS That give definition to our lives